SIMPSON BAY LAGOON:  We anchored in the Simpson Bay Lagoon, on the Dutch and French side.  It is a large bay with lots of room, and it's a calm anchorage !  The downside is that the water color isn't the nicest, thus we never swam off the boat.  We could of anchored at Marigot Bay on the French side or at Simpson Bay, before the bridge on the Dutch side however the anchorages are very rolly.  So, really, it's just a trade off.  Both have good dinghy access. 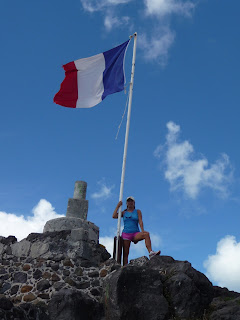 We walked up the Fort St-Louis for a view of Marigot Bay.  It's not the most well kept fort but the view is awesome.  I felt right at home here in a French country. 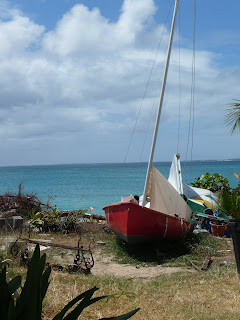 GRAND CASE BAIE:  Grand Case Baie in French St-Martin was one of my favorite places in St-Martin.  It's very quaint, has lots of French restaurants, and has a nice beach.  It's a good place to just chill for awhile. 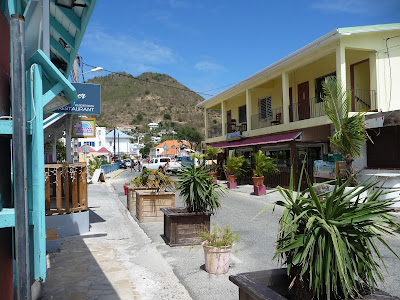 
Our Commodore from our Lake Dillon Yacht club, Scott Snyder and his family and friends were chartering in the area.  I'm glad we were able to visit for awhile. 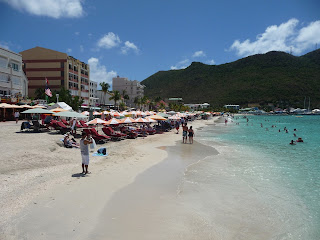 PHILIPSBURG:  We took a local bus for $2 to Philipsburg.  This is where the cruise ships are.  As far as cruise ship shops go, it's one of the nicer places I've seen, but still, it's all geared towards large cruise ship tourists.

On the beach you can find cheap beer and there are several restaurants.  Just beyond the cruise ship stores, you can find real bargains !  The beach here is pretty long and actually, quite nice but busy with tourists.


MAHO BEACH:  At Maho Beach in Saint Maarten, the airport is the main attraction.  No place in the world can people get so close to places that they can almost touch the fuselage as the planes fly over the beach and come in for a lading at the Princess Juliana International Airport.  A thin, 2 lane street separates the beach from the runway.  Thrill seekers flock to feel the jets take off and see them land.  Near the end of the runway, the Sunset Bar and Grill is packed with people.  Each morning, they write the flight schedule on a surf board and broadcast air traffic control instead of music.

But, there's a real danger.  The massive jet engines can easily produce winds of more than 100 mph, blowing people and sand into the water.  There are signs everywhere warning people of the danger but in my mind, I just thought the signs were overrated....I was wrong.  Tim and I stood on the other side of the street near a jet getting ready to take off.  When the engines started, I was sand blasted so badly that I ran into the water in pain.  It really hurt !  THAT WAS SCARY !  I'll never do that again.  In fact, there were people right up against the fence !  It's quite something to see, but please, stay away from the jet engines. 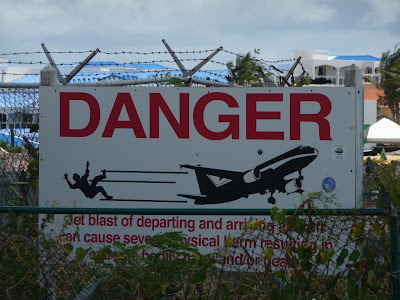 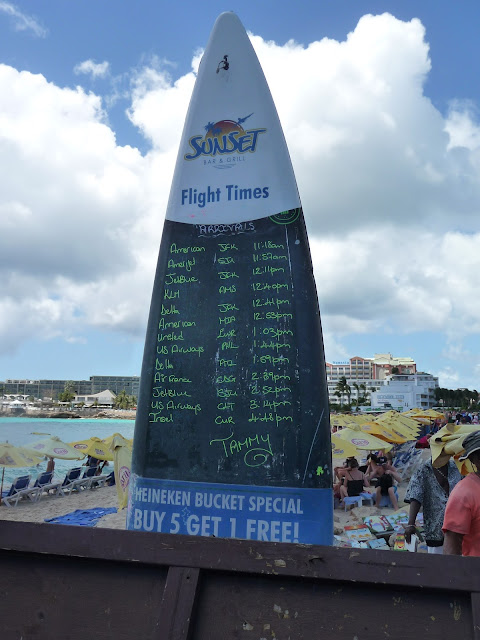 Hints for cruisers:  (Things may have changed since we've been there...)
1 - On the Dutch side, there's a store somewhat like Costco called 'Prime store'.  It's located near the huge ACE hardware store.  They do not have fresh fruits or vegetables.
2 - There are cruiser happy hours at 'Barnacles' on the Dutch side.
3-  If you like naked beaches, to go Orient Beach which is near the Butterfly farm.
4 - In St-Martin, there's a big grocery store called 'U Store' which has everything including cheap wine, cheese, ect... Across the way is the Bakery, get your fresh baguette's there and other sweets.  The 'U Store' is near the bus terminal.
5 - While we were there, there were numerous dinghy's being stolen from either boats or dinghy docks.  Lock 'em up !
6 - If you clear in at 'The Capitainerie' on the French side, it's cheaper than clearing in at Marigot Bay.
7 - Calmos restaurant on the beach at Grand Case Baie has live reggae music on Sundays.
8 - There's a cruiser's net at 7:30am on  VHFchannel 10 from Mondays to Saturdays
9 - On the Dutch side, if you like Shoarmas, there's an outdoor Israeli restaurant near Barnacle's.  They are really good and not expensive at all.  The owner is extremely friendly and he'll give you samples if you'd like.