We briefly anchored in Basseterre.  It was extremely rolly, so we decided to into the Port Zante marina for only .50cents a foot.  A real bargain !  We arrive on the Thursday before Easter.  This marina is near the cruise ships and that night, the music was blaring.  I've heard loud music before but this was by far the worse.  It's a good thing, they only played music 1 night.

We walked around the town of Basseterre, and honestly, I really didn't like it.  Most of the downtown area is run down unfortunately.
In the center of town, is a prominent Circus, a diminutive roundabout modeled in proper Victorian patriotism after Piccadilly, in London.

For some R&R, walk along the waterfront towards Palm Court.  This area is much nicer than downtown.  Palm court is a restaurant with an infinitely pool you can use for $10/day.  It also has a large shell store but was closed when we were there (Easter week-end).

There is a Scenic train ride (465-7263) for about $100.  Apparently, it doesn't go very far.  Instead, we hired a guide with cruiser friends Nana & Spencer on s/v Adverse conditions.  We paid $40 a couple for a 3 hour tour.  I think the train ride was geared towards the cruise ship tourists.

Beware of holidays !  We tried to go to the Brimstone hill Fort but was closed as it was Good Friday, argggg.  Instead, we drove to see large volcanic rock by the seashore and black sand which I've never seen before.  We also saw a nice view point to see the narrows.  We went by Reggae beach, White House Bay, Banana & Cockleshell Bay.  We especially like White House Bay for it's remoteness and beauty.  We finally walked around an old plantation and visited a true Batik store.  At this store, they demonstrated how Batik was used to draw the beautiful colors.  Batik, is a technique of wax-resist dyeing applied to cloth made for using this technique.  It is an ancient art form that existed in Egypt in the 4th century BC. 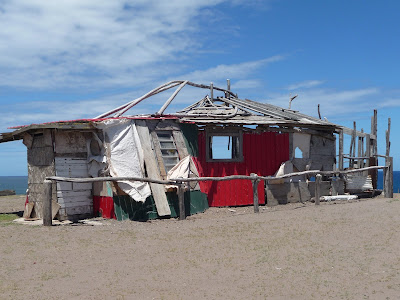 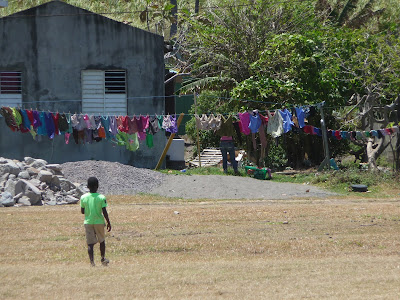 Hints for Cruisers:
1. If you clear in at the Port Zante marina, beware that if cruise ships aren't in, you'll have to go to the airport for immigration.
2. Port Zante marina has no laundry facilities.  It does have showers & toilets.
3. Grocery stores are within walking distance from the port Zante Marina.