Our 11 hour sail between Barbuda and St-Barthelemy (St-Bart’s) was one we’ll never forget.  We caught a 25 pound Mahi (so we think) and did our usual by pouring fish gin down it’s gills to sedate it or perhaps even kill it prior to bringing it on board, in our cockpit.    Normally, I put all pillows, seats and anything that could get dirty or get in the way, down below before bringing fish on board.  For some reason, this time I didn’t.   There was a little amount of blood which isn’t a big deal.

Our fish, we named “Freddy” came back to life.  He was a zombie !!!!  Unlike the slow moving Walking Dead people, Freddy was thrashing wildly in the cockpit splashing huge amounts of blood everywhere.  I mean everywhere; the inside of the bimini, all over us, on our seats, under covers, down below, places you wouldn’t even imagine how the blood got there.  Tim had to hold it down so it would stop.  I sat back and laughed.  What else was I going to do?  It looked like we slaughtered a cow.

Now, reality set in.  We were not happy at all.  While going downwind at 7 knots rolling back and forth with our whisker pole keeping our jib out, we had to clean up the mess and scrub all the blood.  We bagged Freddy and threw him in the freezer.
Once anchored in beautiful Anse De Colombier in St-Barts and 11 hours later, I still needed to fillet Freddy and clean everything again but this time with fresh water.  We ended up having a delicious Mahi dinner with wine to celebrate the end of our day.

I did not take any pictures of our St-Valentine’s massacre because my feet were covered in blood and my camera was down below and besides, it was quite gruesome and not everyone would have appreciated the picture.

The following day we hiked from Anse De Colombier to Anse Flamands, walked down the beach to find beautiful French hotels then took the road to a view point where we could see Anse Flamands and Anse De Colombier.  We continued walking of the road admiring the upscale homes and hiked back to the beach taking a trail.  Along the way, we fed a friendly land turtle, saw green lizards, and sheep.


We walked from the main town, Gustavier to the St-Jean roundabout to watch the planes land.  Pilots have to have special training to land at this airport because they have to fly between a very narrow area then nosedive onto the runway.  We stood on the road prior to the plane nose diving.  They were so close, it seemed like they could have hit us.

This was our second time in St-Barts.  Too view my previous blog on St-Barts, look for it dated April 1, 2015.

From Anse De Colombier to Ile Fourchue is only a few nautical miles.  This island is uninhabited with no beach per say.  The water here is not clear.  So why go here you ask…The hiking !!  it has several peaks with stunning views.  There is some scrambling involved and some route finding but lots of fun.  We bagged the 3 tallest peaks on Ile Fourchue in less than a day having lunch on the tallest peak, about 1,000 feet.

These peaks are not very tall for us since we are big hikers back home in Colorado, however, don’t be fooled.  They have their challenges.  Heat, humidity, no designated trails, prickly bushes, spiders, slippery rock, and crumbling rock and perhaps snakes to contend with.  The heat sucks out my energy so I’m always wearing a hat and looking for shade. 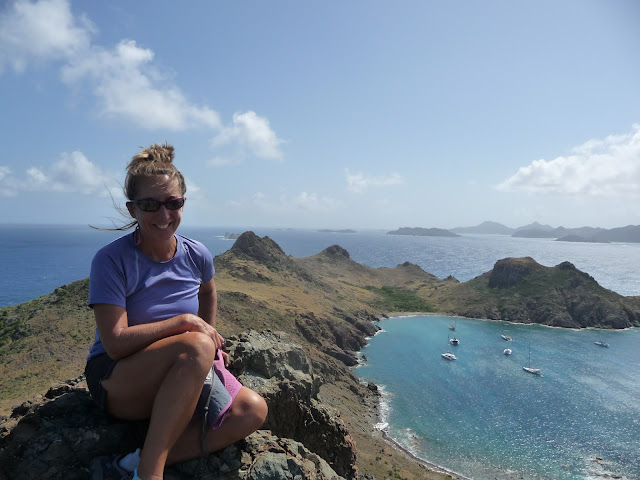 INFORMATION FOR CRUISERS:
At Ile Fourchue, as of Feb.17, 2016, the mooring ball closest to the beach is half way chaffed thru.  Use your second line under the knot.

Anse De Colombier is very beautiful with a nice beach.  There are no facilities in Colombier.  It’s a long dinghy ride to Gustavier to clear in and out however in calm seas it’s quite doable if you have a reasonable outboard.