BAHAMAS 2015
We left Miami at 2:30pm thru the Miami inlet.  The Gulf Stream was a bit rough but it wasn't too bad.  We sailed for 11 hours and motored for 11.  We dropped the hook near Bimini at midnight to take a break.  Unfortunately, the winds picked up around 2am and since our boat was pitching badly, we picked up the hook and continued on to the Great Harbor Cay in the Bahamas.  After a long wait to get a good weather window, we finally arrived in the Bahamas.

GREAT HARBOR CAY:  Beware cruisers !  Immigration and customs do charge overtime if you arrive outside their  normal working hours.  Other cruisers arrived at 7:50am at the marina, 10 minutes before the immigration offices opened.  The marina called the immigration office telling them of the boat's arrival.  So, even though they physically went to the office after it opened, they were charged $50US.   I don't think this is a usual practice but unfortunate.

DEVILS-HOFFMAN CAY:  We Motor sailed around the North side of Great Harbor Cay with our buddy boats "Haven" and "Harmonium Cays" and we all caught Cero Mackerels.  I'm guessing there was a large school of them.

We went to the blue hole to snorkel.  It wasn't so blue and very dark and dreary.  Definitely, it was not my preferred place to swim. 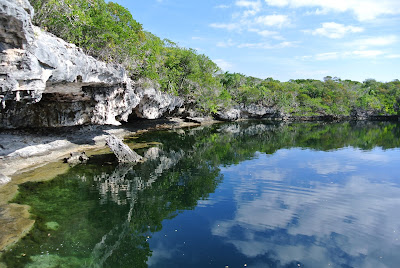 LITTLE HARBOR CAY:  You can call Flo of Flo's Conch bar and order some food and have beers if you'd like.  Except that Flo died a few years ago so call Chester instead.  It's sad to see all the empty conch shells just laying by the beach.

ROSE ISLAND:  Two and a half hours after leaving Little Harbor Cay, we  caught our very first Mahi Mahi; a 4.5 foot bull. So, what do two people do with so much fish? Share it of course with our buddy boats. We had yet another feast and enough left overs for several more meals.  Krista brought Champagne and Brenda brought some special cookies.  Thanks girls !


NORMAN's CAY:  We snorkeled the sunken DC3 plane which used to belong to drug lords Carlos Leder of Columbia.  He used this Island in the 80s to deal his drugs.  His house he had still stands but it is in ruins.


Tim and I speared and enjoyed eating the three spiny lobsters we caught.  Because there was current, we held on to a stern and bow line on our dinghy until we saw lobsters and speared them. 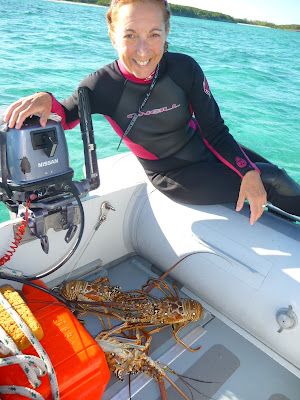 WARDERICK WELLS CAY:  We had one of the best snorkels ever.  Just outside of the mooring buoys we saw 2 spotted eagle rays and followed them for about 30 minutes.  There were also several reef sharks.  We hung onto a line from our dinghy and just enjoyed the show. 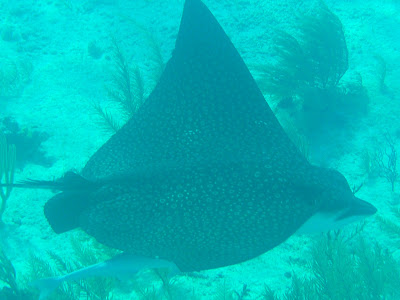 O'BRIEN'S CAY:  We anchored alone at O'Brien's Cay, next to Johnny Depp's Island called Little hall's Pond Cay.  There were several cross bone signs warning people not to step onto his island.
﻿﻿

STANIEL CAY:  We anchored along with 'Haven' and 'Harmonium Cays' near Thunderball cove.  The Thunderball grotto got its name from the 1965 James Bond spy film "Thunderball", which was shot there.  We watched the movie but honestly, it was better to snorkel the grotto.  It was also the site of another James Bond film, 'Never Say Never Again' in 1983, also based on the Thunderball novel.

This cave system is great for snorkeling.  It is teeming with exotic marine life and a kaleidoscope of brilliantly colored coral reefs and fish.  The grotto's mystique is heightened by the small, almost hidden entrance which we could swim into from our boat.  It is best to go at slack tide.


﻿
We spent the Christmas season with our buddy boats 'Angel Eyes', 'Haven' & 'Harmonium'.   For two nights in a row (Xmas Eve and Xmas), we ate and drank and laughed a great deal. Imagine 10 people on our boat with great cooks and beautiful people. I am extremely lucky to have met this great bunch of friends I have to mention their names; Nancy & Rick, Brenda & Al, Krista & Phil. Visiting was Kelly & Eric. It's hard to be away from home during the holidays so having lots of people around helps a great deal.

Even though we saw the swimming pigs last year, we just had to go back to Big Major Cay to see them again.  This Island in the Exumas is uninhabited and is home to wild pigs who swim up to your dinghy for food. 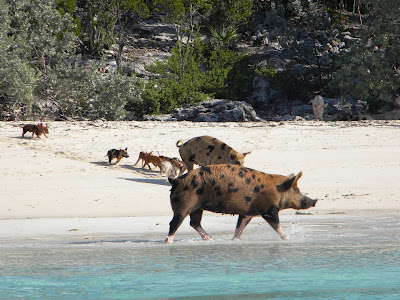 BLACK POINT, Great Guana Cay:  This is a fantastic place to get laundry done with loads of machines and free wifi and picnic tables outside.

Unfortunately, 'Haven' developed a fuel leak which was leaking into their cabin.  They managed to get it fixed in a few days but it was quite frustrating.

LITTLE FARMER'S CAY:  We anchored west side of island near TY's bar.  Here we met up with Susie & Brian on s/v 'Stella' whom we met back in Vero Beach.  We were the only 2 boats in the anchorage.

We took a walked around the small Island and met Israel Percenti.  He was sitting on his chair by his house and waved to us to come over.  Israel was quite chatty but happy to show us his incredible vegetable and fruit garden.   I was amazed as there is not much water on this island.  He picked a watermelon and cut it in three.  He also gave us some pomegranates right off his tree and we sucked the little seeds while he talked about the history of the island.  Go and meet Israel, he is extremely friendly and kind.

CAVE CAY:  We anchored here all by ourselves.  This is a private island where you cannot walk on.  There is a  nice upscale marina owned by a Texan here.  You can get a slip, fuel and water.  If you get a slip, they will let you walk around.  Shark, the very smiley Manager will be happy to escort you to the caves.

LEAF CAY:  (near Lee Stocking Island):
There is lots of snorkeling near Iguana beach.  Unfortunately, we didn't see any lobsters.  We did however kill a lionfish.   In case you don't know, lionfish are native to the Indo-Pacific area.  They have been described as 'one of the most aggressively invasive species on the planet'.  They were likely first introduced off the Florida coast by the early to mid-1990s.  This introduction may have occurred in 1992 when hurricane Andrew destroyed an aquarium in southern Florida, releasing six lionfish into Biscayne Bay. GEORGETOWN & MONUMENT BEACH:  On New Year's Eve, on our way to Georgetown, we caught our second Mahi Mahi, this time a female.  We shared our catch with Nancy & Rick (s/v Angel Eyes)  that night. Eating fresh Mahi Mahi is such a treat.  We went to the St-Francis bar & restaurant for New year's Eve dancing but there just didn't seem to be much of an atmosphere unfortunately.  We had more fun on our boat devouring the Mahi Mahi :) 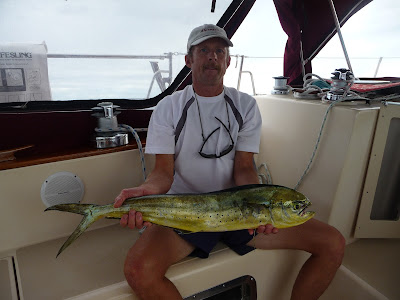 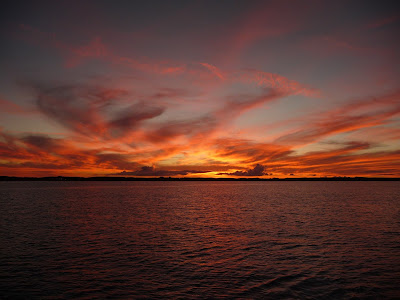 You cannot miss going to Eddy's to dance to the live Rake-n-Scrape music. This type of music comes from the musical traditions of the Turks and Caicos Islands and is characterized by the use of a saw as the primary instrument.  It was brought by immigrants from those islands from the 1920s to about the 1940s, who settled on Cat Island, and elsewhere.    The saw instrument is scraped with a nail or better knife.  Bent against the body of the player and flexed, various effects are obtained.

On January 7th, 2015, we said good bye to our long time cruiser friends Rick & Nancy.  They were headed to Cuba and us to the Dominican Republic.  To this day, we still keep in touch and hopefully one day we'll catch up with them.

GOAT CAY, Elizabeth Harbor:  This anchorage is near Georgetown.  We needed some quiet time.   It's quite secluded and beautiful however it's rolly.

FOWL CAY:  While snorkeling I saw the biggest shark I've ever seen snorkeling.  It was so fast, I couldn't tell what type it was.  Needless to say, we didn't stick around.  I hated having to jump back into the dinghy as this is a very nice spot to snorkel.

LONG ISLAND, Salt Pond:  We left Fowl cay with 'Haven' and 'Harmonium Cays'.  It was one of the best sails we ever had.  We were going steady at 8 knots with 20 knot winds gusting to 25, from the NE on a beam reach the whole way to Long Island, Salt Pond.  It only took us 5 hours.

We rented a car to visit the Island.  Our first stop was Dean's Blue hole.  It is the world's deepest known salt water blue hole.  It plunges 202 meters (663 feet) in a bay west of Clarence town.  Blue hole is a term for water-filled sinkholes with the entrance below the water level.  While there, deep divers were practicing.  Some were wearing a skin tight black thin wet suit.  While taking a picture of Brenda, you can see the in background an alien walking the edge of the mountain behind her.

﻿﻿
We found Leonard Cartwrights's home to ask him to give us a tour of his cave.  He owns 400 acres on which is an elaborate cave with several species of bats.  At his house, he offered us golden coconut water which is by the way, my favorite of all coconut juices. 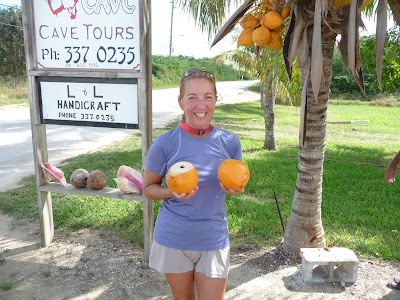 LONG ISLAND, Calabash Bay:  We said our good byes to Brenda, Al, Krista & Phil.  There plans were to sail to Cuba and we were going to the Dominican Republic.  We keep in touch with them often and hope to see them also in the future.

The Cape Santa Maria Resort has a great happy hour with free conch fritters which in my opinion are one of the best.

Posted by ALPENGLOW at Wednesday, January 14, 2015