To fully appreciate Cuba, one should know a little history before visiting.  I became a US citizen only a few years ago, so I am particularly interested in the US and Cuba past relationship.  After my little history write up below, you’ll find our experience in the first city we visited; Cienfuegos and the Laguna Guanaroca.

Fulgencio Batista Zaldivar was the elected President of Cuba from 1940-1944 and the US backed this dictator from 1952-1959 before being overthrown during the Cuban Revolution.  During this time, Batista worked to increase his personal fortune.  So much so that when he fled with 40 cabinet ministers and family members to the Dominican Republic on January 1st, 1959; he took with him a fortune worth 300 million dollars.  Critics accused Batista and his supporters of taking as much as $700 million in fine art and cash as ministers and cabinet members also fled into exile.

Batista murdered 20,000 Cubans in seven years and turned Democratic Cuba into a complete police state, destroying every individual liberty and stealing hundreds of millions of dollars from the Cuban people.  He "completely failed to advance the economic welfare of the Cuban people".

During this time, in a manner that antagonized the Cuban people, the U.S. government used its influence to advance the interests of and increase the profits of the private American companies, which "dominated the island's economy".  As by the late 1950s, U.S. financial interests owned 90% of Cuban mines, 80% of its public utilities, 50% of its railways, 40% of its sugar production and 25% of its bank deposits—some $1 billion in total.

Finally, in March 1958, the U.S. announced it would stop selling arms to the Cuban government.  Soon after, the U.S. imposed an arms embargo.  The U.S. then imposed further embargos.

As relations between Cuba and the United States deteriorated rapidly after the Cuban Revolution and the resulting expropriation and nationalization of businesses, the island became cut off from its traditional market by an embargo and a travel ban was imposed on U.S. citizens visiting Cuba. The tourist industry declined to record low levels within two years of Castro's accession to power.  Today, tourism generates over 2 million arrivals per year and is one of the main sources of revenue for the island.

After the Cuban Missile Crisis in October, 1962, travel restrictions were imposed by President Kennedy.  The current regulation does not prohibit travel by U.S. citizens to Cuba per se, but it makes it illegal for U.S. citizens to have transactions (spend money or receive gifts) in Cuba under most circumstances without a US government Office of Foreign Assets Control issued license.  On July 25, 2011, OFAC (United States Treasury Department's Office of Foreign Assets Control)  declared that the "people to people" relaxation of restrictions on travel conceded by the Obama administration should not be mistakenly interpreted as promoting tourism.  In January 2015, the Administration lightened restrictions on U.S. citizen travel to Cuba. While restrictions on travel for missionary work and education have been loosened, visits for tourism remain banned.

We decided to file form CG3300 to apply for travel in Cuban for “people to people”  purposes.  The US Coast guard approved our visit.  So off we sailed from Cayman Brac to Cienfuegos, Cuba.  Along the way, two stowaways decided to land on our boat for the night.  Our stowaways were two different little land birds which had no reason to be 50 miles from the nearest land.  We figured they were lost.  We gave them water and food but in reality, they just wanted shelter and sleep for the night.  After many landings and searching our boat for the best place to perch for the night, they both opted to stay under our dodger, one on the port side and the other starboard.  They puffed up their feathers to stay warm and didn’t budge for 12 hours !  Just after sunrise, they said thanks and off they went.  We were just glad to have helped them.

Our first landing was the city of Cienfuegos on the south coast of Cuba. 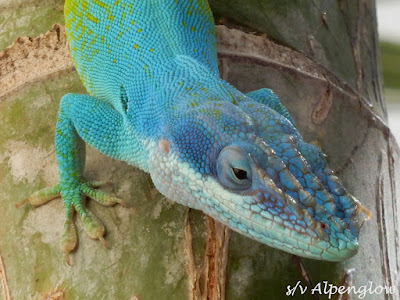 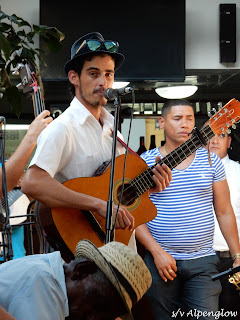 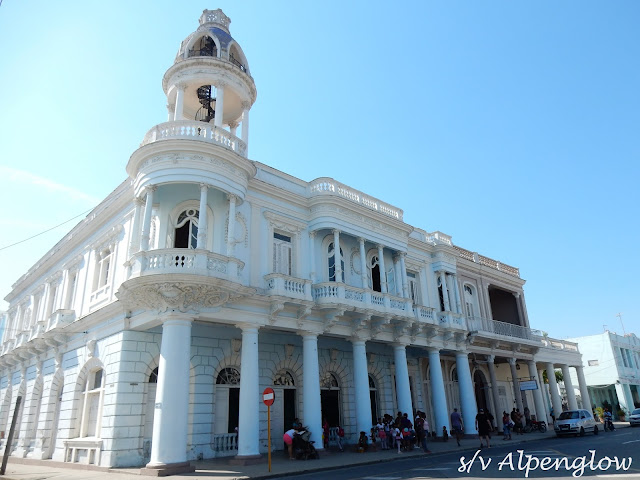 We met Rebecca & Dov who were also in the anchorage on their m/v Blue Compass.  We got along famously with them and traveled all throughout Cuba with them.  They also had bikes so since they are quite the bird watchers, we biked to the nearby bird sanctuary at Laguna Guanaroca.

We hiked along the paths finding exquisite birds such as the Cuban Tody. 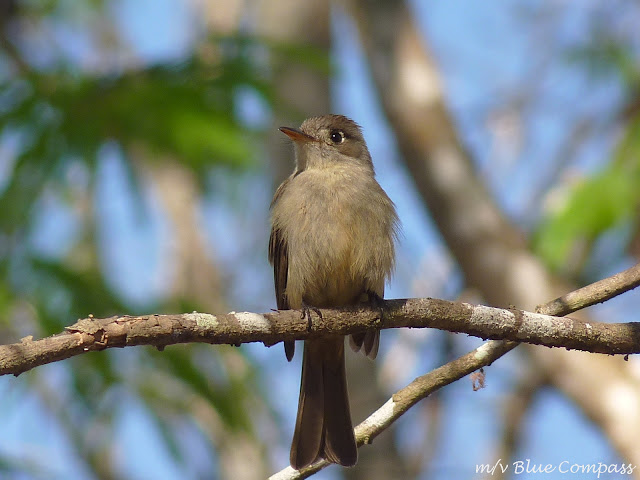 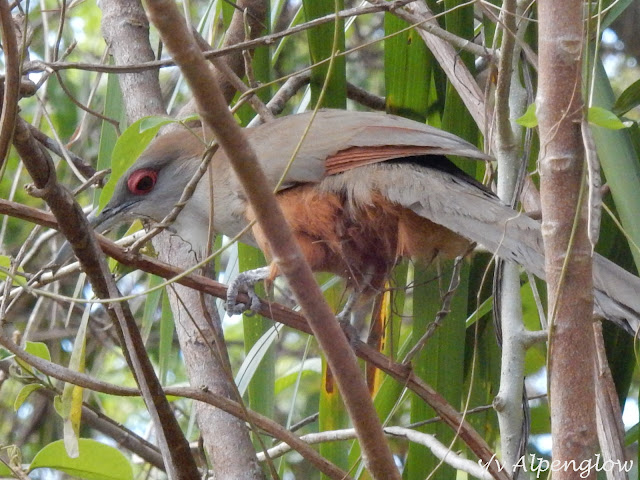 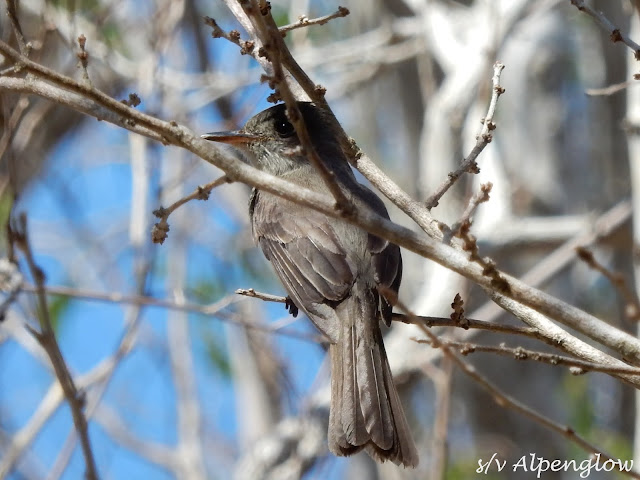 There were guides at the laguna to take us to see more birds.  We weren't going to go at first but we are sure glad we did.  Rebecca really wanted to see the elusive Cuban Trogon, which is the Cuban National Bird.  She asked her guide if he could possibly find one.  He started listening and eventually heard one.  We left the canoes along the shore in the mangroves and bushwhacked until we saw a couple of Cuban Trogons.  WOW ! 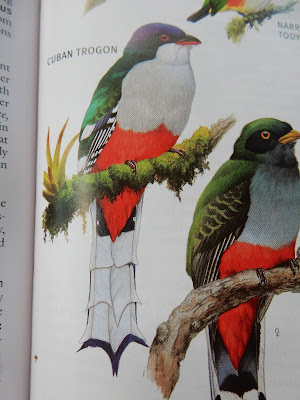 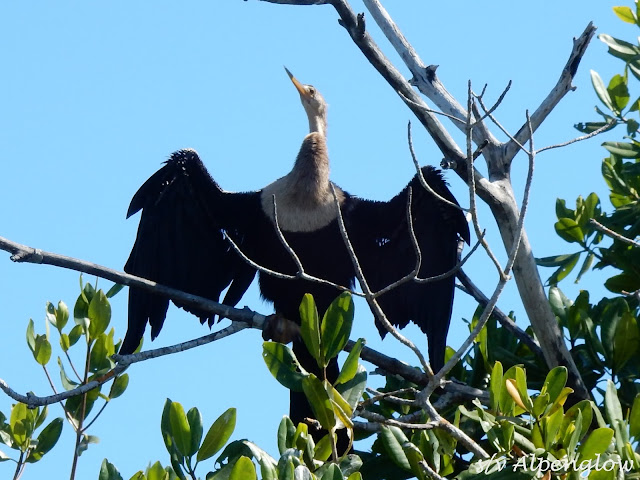 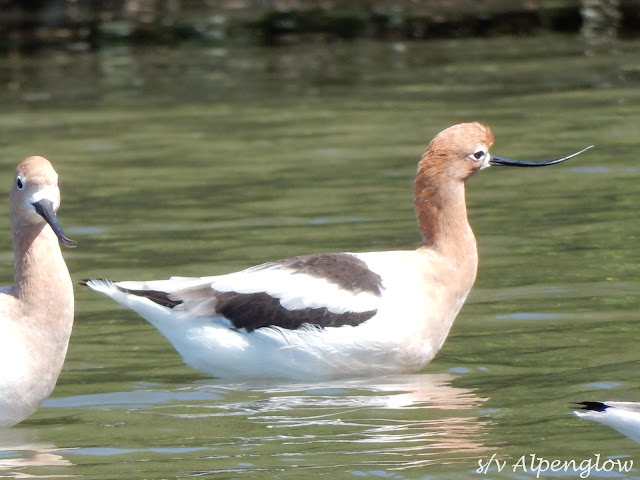 Checking In:  We checked in at Cienfuegos.  We had to dock at the marina.  A Doctor came aboard to check our temperatures and did some paper work.  Then, Customs and Immigration came on board and did the usual paper work.  That's it !  We were told that immigration gives  Canadians 3 months, US citizens 1 month and Europeans 2 months to stay in the country.  Of course, you can apply for an extension.

COASTWISE CLEARANCE:  We had to inform the officers that we were leaving Cienfuegos for Cayo Largo.  Every time a boat leaves for another destination in the country, you must advise the authorities.

Checking out of the country:  We checked out of Cuba at Cayo Largo.  Two customs officials and a drug sniffing dog came aboard.

Taxis vs Buses:  We found taking taxis off the beaten path (away from tourists areas), the taxis are less expensive and sometimes even cheaper than taking the buses, especially if you share the taxi ride.  In Cienfuegos, on the street by the Club Nautico, there was a man dressed in a white shirt with a tag around his neck.  He is a delightful man who can arrange taxi rides for you.  We used him to get to Havana.  Also, at the marina, you can talk to some of the men who also have connections with taxi drivers. All, at a very good price.

Vegetable & Fruit Market & Eggs:  It's located in the downtown area of Cienfuegos. Go early for best choices.  A lady tried to sell us 'her special eggs' at a very big price. Just go to the egg market on the on the main pedestrian drag downtown.  You can't miss the place, it only sells eggs.