This is Part II of my blog about Belize.  Part I can be found under June 2016.

After hiding from the hurricane season in the Rio Dulce and visiting the beautiful country of Guatemala, we finally had to say good bye to the numerous new friends we made and say so long to our old friends in the hopes that our paths will once again cross.

The high heat & unbearable humidity of the summer in the Rio Dulce had turned our boat fenders and tarp black with mold & dirt.  Not to mention turning our lines green.  We had lots of scrubbing to do before leaving the Rio. 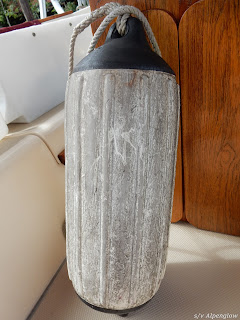 From the Tortugal Marina, we motored down the river to "Cayo Quemada" also know as "Texan Bay" named after "Texas Mike" who once owned a marina there and now owns a restaurant.  We had the privilege of having dinner with Mike and listened to his numerous stories. He's quite a character and kept us entertained for hours.  He told us the reason why there is little crime in the area.  Basically, the Guatemalan mob keep the petty criminals in line because they don't want the cops to come around.  A ring leader woman and her followers were stealing something and the mob didn't like it, so as the story goes; the mob went to Backpacker's restaurant where the woman was having lunch and killed her in broad daylight.  This happened just a few years ago and by the way, Tim & I have been to this restaurant several times.

We stopped at the Sapodilla Cayes for a few days just to be alone & do some snorkeling before heading to Placencia.

We went to Placencia because we were picking up our Colorado friends Brian & Sephora to visit some of the Cays around Belize with us.  We sailed, kayaked, snorkeled, caught lobsters, saw several dolphins, visited a frigate bird island and had a fantastic time with them.  We visited the cays of Ranguana, Rendezvous, Tobacco Range, Cross Cay, Sapodilla Lagoon and Little Water Cay.  We had lots of north winds so we picked those cays that had some protection.


While snorkeling one day, Sephora spotted a crocodile onshore and it quickly ran to the water and swam under the kayak she was in.  We later read that there are American Crocodiles in Belize.

One evening, Brian asked me if the blue light in the water was bioluminescence.  I have seen lots of bioluminescence while sailing and because of this I knew it wasn't so.  It seemed that these bright blue lights swimming by were either some kind of fish or jelly fish.

After dropping off our friends we anchored in the Placencia Lagoon for more protection and to be closer to friends Linda and George on s/v Chez Nous.  They spend several months a year at the Robert's Grove marina.  Linda & George spoiled us while we were there to a delicious Thanksgiving dinner, a barracuda dinner George caught, swam in one of the 3 pools at the marina and we went for a drive in their car to Spanish Waters.  Although the water in the lagoon was murky, we were surrounded by manatees & dolphins.


At Robert's Grove marina & hotel, they have 3 huge pigs they use to collect their poop.  Why would anyone do this you ask ?  They are producing methane gas.  We aren't sure how exactly they are collecting the gas or what they use it for but it sounds environmentally good. 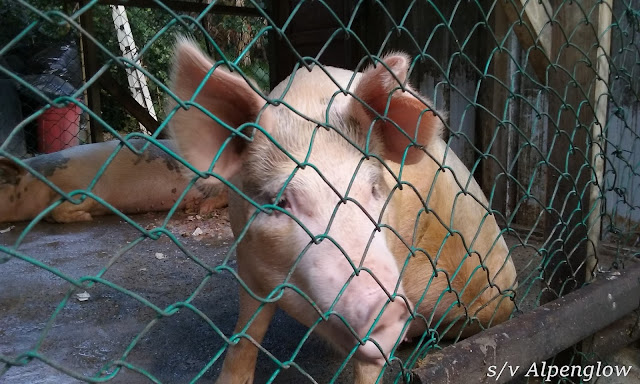 Before leaving Placencia, we had happy hour drinks with Andy on s/v Jacobs, Dave & Mary on s/v Argonauta, Shane & Rob on s/v Scurvy dog and Linda & George s/v Chez Nous.  We will meet up with them again in Roatan except for Dave & Mary who are heading to Mexico.

We took advantage of a SE wind which we needed to head north.  We had a perfect 55 nm (nautical mile) sail from Placencia to Water Cay which is about 10 miles from  Belize city.  Along the way, we crossed a deep channel for cruise ships called The Eastern Channel with about 150 feet of water.  Three humongous cruise ships motored past us at dawn and anchored about 5 miles from us. They were the Carnival Sunshine, Carnival Splendor and Caribbean Princess.

The SE wind kept up the following day so we had another perfect day of sailing to Cay Caulker.  We sailed by Swallow Cay which is a sanctuary for manatees.  We needed to be vigilant while sailing into the Porto Stuck channel, well named because at low tide it's only 5.5 feet at each end of the channel.

The population of Cay Caulker is about 1,200.  Their electricity is produced by huge, loud generators.  One late night, we used the dock lights to unlock our dinghy and not a minute later, the generators stopped working and all the lights on the Cay were out.  Good timing !

Cay Caulker was hit by hurricane Matthew a few months ago.  Most of the docks seemed to have been damaged and some trees were down, however the buildings seemed to have stood their ground.

We had a great time at the "Barrier Reef Sports Bar & Grill" listening to local bands and Garifuna drumming.  This local's type bar was full of ex-pats having a great time.

We then sailed to San Pedro on Ambergis Cay.   There is no good anchoring here as the bottom is sand over rock but our Rocna anchor held us just fine as the winds were relatively light and always from the same direction.  There's a lot of wake in the anchorage as it's a busy tourist area with jet skis and tour boats generating lots of wake.  We needed to come here to check out of the country before going to Roatan.  In the meantime, we snorkeled at the Hol Chan & Shark Ray Alley marine park and at the reef outside the park. 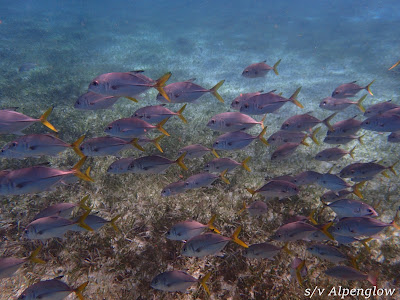 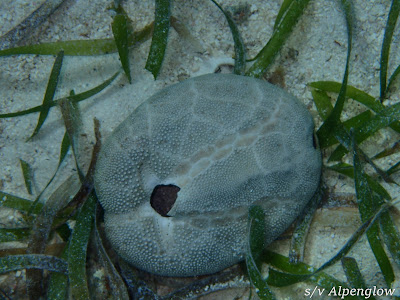 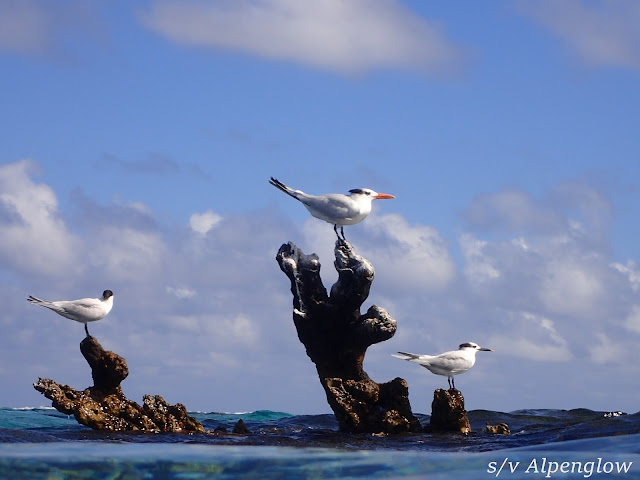 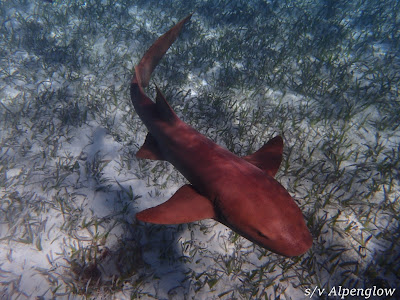 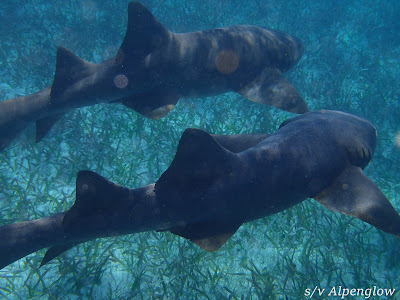 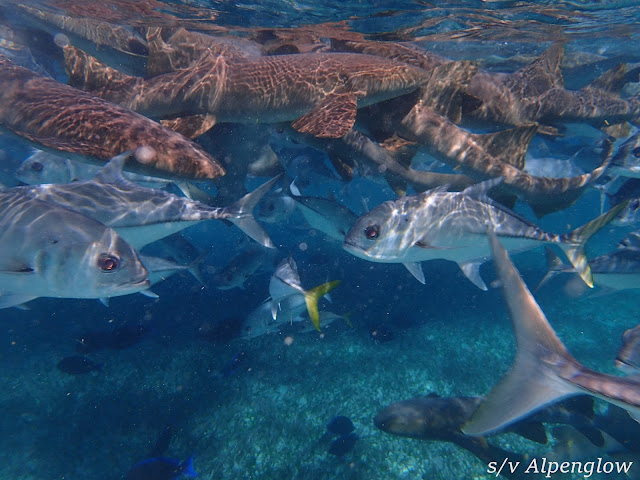 If you want solitude, you can find it in Belize.  You can anchor by yourself in the numerous tiny cays between the mainland and the barrier reef.  Some protect you from the northerly winds others protect you from the east and south, you pick.  Many of them are uninhabited or have a tiny house for local fishermen we call fishing houses.  Watch the dogs, some cays have dogs just to keep you out.  Some Cays are privately owned, some have actual running small resorts, others have been under construction for years, some have failed and some have never completed construction.  A few have a population of about 20, those are the bigger cays for sure.  Some privately owned cays will let you visit, others won't even let you on shore even though they are completely vacant except for the keeper.  Keepers of Cays live there for  2 or more weeks, drink the juice of the golden coconuts, fish for food, rake the seaweed, and count the turtle nests.  They would gladly accept a drink or 2 or 3, friendship and any food you'd like to share.  One keeper told us he counted 58 turtle nests!  We missed the hatching of turtles by 1 day, drats !  Many of the Cays are made only of mangroves so there's no way to go onshore.  There's loads of great snorkeling around many of the cays and yup, we did catch lobsters.

For information on the Atolls, refer to my blog BELIZE PART I (June 2016)

Little Water Cay: Somewhat protected from north winds.  Pitbulls onshore.  We showed them sticks and they went away crying with their tail between their legs.

Seafood: You can buy local seafood at the Co-op by the city dock across from Friends restaurant.  Sometimes fishermen sell their fish at the end of the day at the city dock.

Dinghy:  You can park your dinghy at the city dock for 5BD (while we were there it changed from 2.5 to 5) a day or just leave it at Yoli's bar (the owner is a Belizean women, not her Canadian husband).

Stugeron (Anti seasick medicine):  We found some at a pharmacy in Spanish Waters.

Anchoring:  Don't anchor too close to the cell towers because they are next to the huge loud generators.

Marine Park:  Cruisers CANNOT anchor their dinghy nor take a mooring ball in the park at Cay Caulker.  You can't even spear a lion fish.  The marine park ranger caught us and told us that the only way to snorkel in the park was to go with a guide and absolutely no spearing whatsoever.  Other marine parks in Belize will allow such behavior, just ask the ranger.

Laundry:  There are several laundry services and a coin laundromat on the road near the huge generators.

Dinghy:  You can park your dinghy at Ramon's Village hotel.  You can use their pool also.

Grocery:  Walk thru Ramon's Village, turn left on the street.  When the street curves to the right, it's on your right hand side.

Scuba Diving:  There are shops all along the water front.
Posted by ALPENGLOW at Monday, December 05, 2016