Our last moment in Belize. 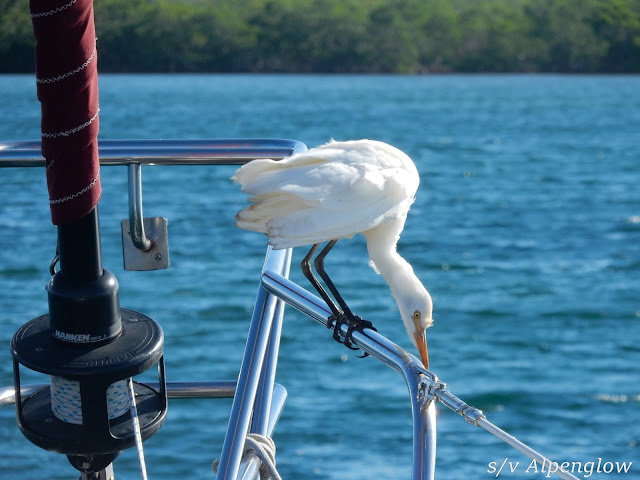 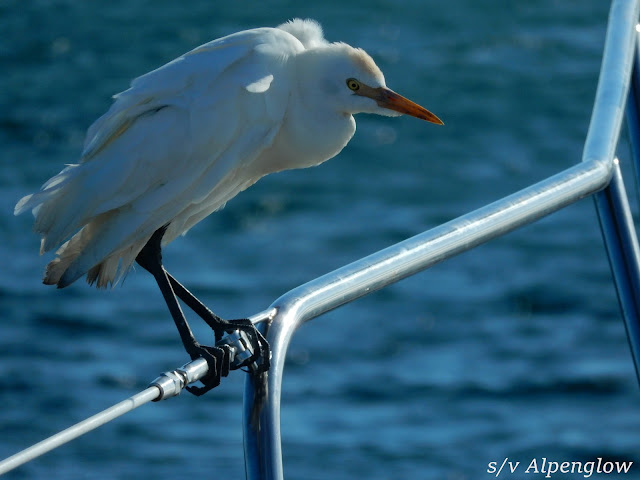 Soon after we left the Lighthouse reef in Belize towards Utila, I saw a spout.  A spout ?  Whale sharks don't breathe.  Oh boy, it's a pilot whale !!!!!

Our overnight sail from Lighthouse reef was well, hard on the nose.  We tacked back and forth for 40 Miles to make sure we didn't go directly into the waves.  Our intention was to go to the East end of Utila however 10 miles short of the island, a 40 degree wind shift pushed us off course.  Since we didn’t want to gone directly into the waves, we let the wind push us and it only set us back about 10 miles as we motored around the West side of Utila.

On our way to Utila, I was staring at our odometer to watch it change from from 9999.9 nautical miles to 10,000.  I was ready with my camera for the exciting moment.  Unfortunately, it ended up being a real disappointment.  Apparently our odometer doesn't have room for 5 digits.  So rather than seeing 10,000 it showed only dashes.  I should of known.

Utila is the smallest of the Honduras Bay Islands and the flattest.  It's 9.5 miles long and 3 miles wide.  Renowned as one of the best diving locations in the Caribbean and is also known as the cheapest.  Honduras is known for the most aggressive no-seems anywhere.  Fortunately, we weren't bitten alive however we did notice many tourists with nasty bites all over their legs.  I guess the newly arrived tourists were better tasting than us.  I'm not complaining!Diving is geared towards backpackers who don't travel with all their dive equipment.  Many dive shops in Utila include all the gear when you dive with them.  Not a bad deal at all !Whale sharks are in the area most of the year however the peak months tend to be between mid February to the end of April.  We'll be back since we kept missing the whale sharks by a day apparently..... 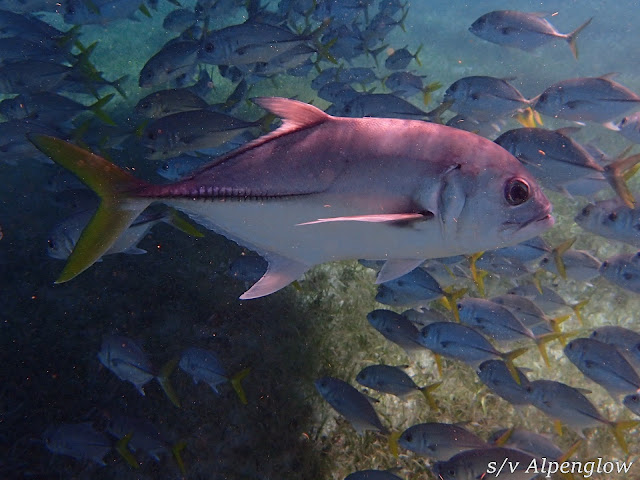 There is a beautiful bar/restaurant in town named The Jade Seahorse that is decorated in a fantasy scheme.  The artist or artists spent many hours laying the millions of small pieces of tiles in the restaurant and outside in the gardens.  There are several sitting areas built high above so you can enjoy a beautiful view of the decor while sipping a cocktail.  The restaurant also has a couple of cottages to rent.  It's worth a visit so it is located one up from the town dock on the left hand side. 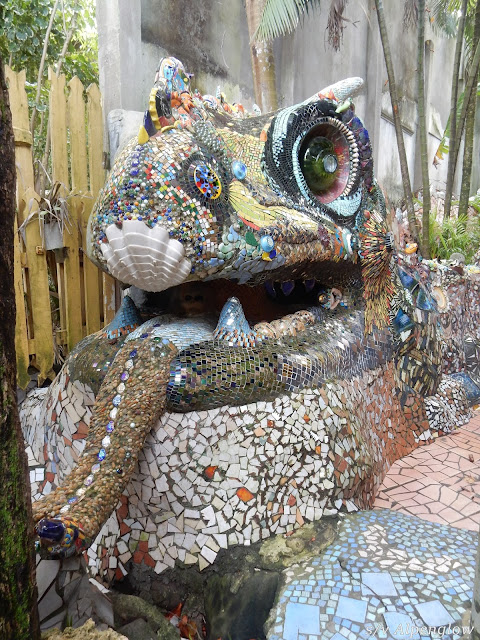 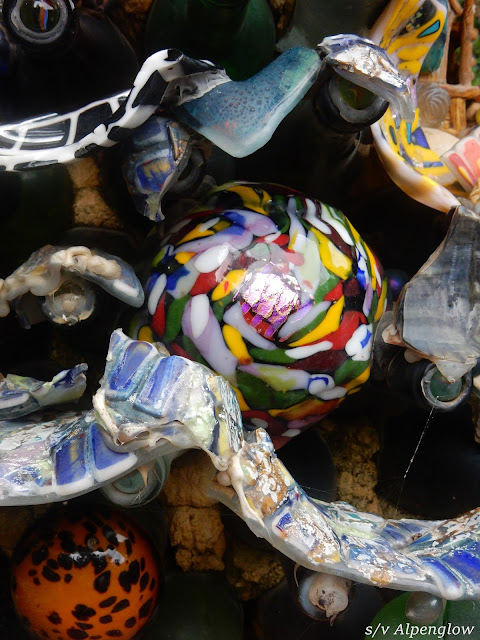 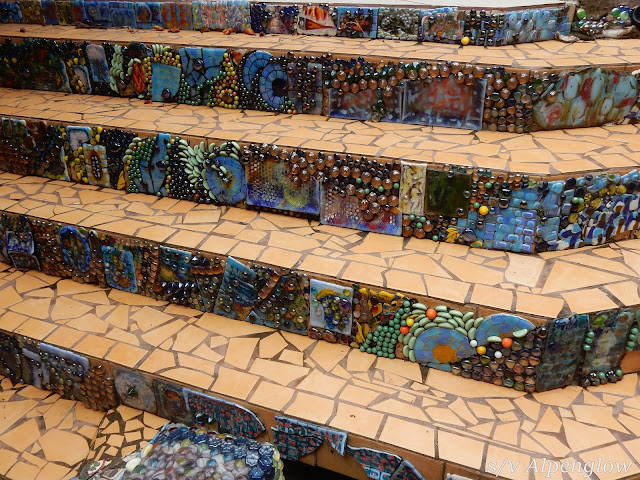 We walked from the dinghy dock thru town and pass the airport to find a fresh water cave.  It was easy to find the cave however getting inside required us to crawl on our hands and knees in mud.  As we were crawling, I felt wind behind me and between my arms and legs which were bats flying around...cool !  Along the way we lit candles so we could easily find our way back.  At the end of the tunnel, a pool of fresh cool water was waiting for us. 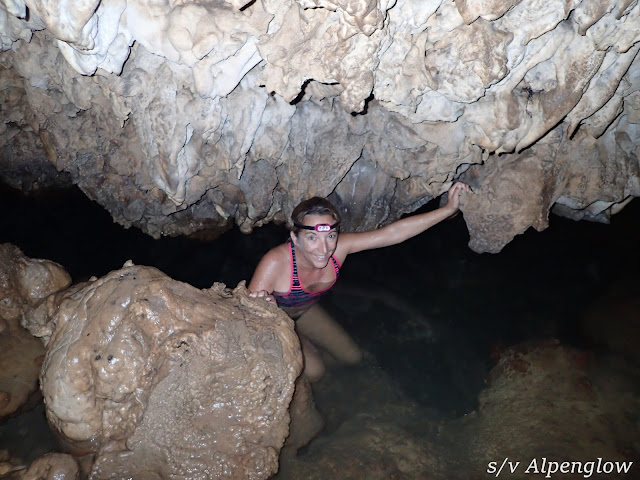 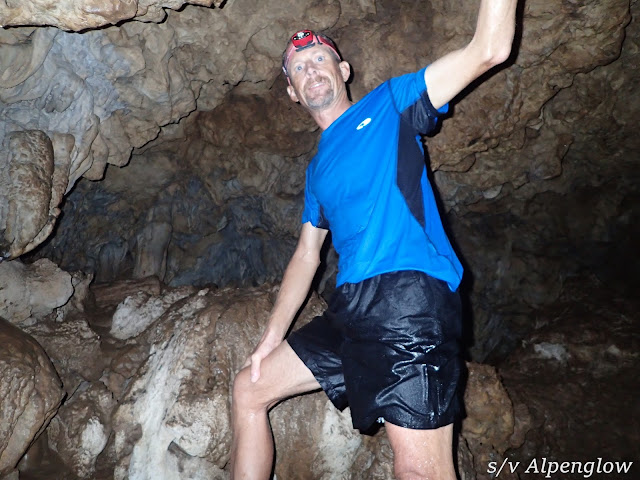 The tallest point on Utila is called Pumpkin hill.  There are beautiful views of the island and some caves to explore.  The road up the hill is off of Lozano's street, on the left on the way to the airport.

There are Swampy Iguanas on the island that are found nowhere else in the world.  The Iguana Station is trying to stop their extinction by breeding them and bringing babies from the wild to their sanctuary.  One of the reasons why there are so few left is because the locals eat them. 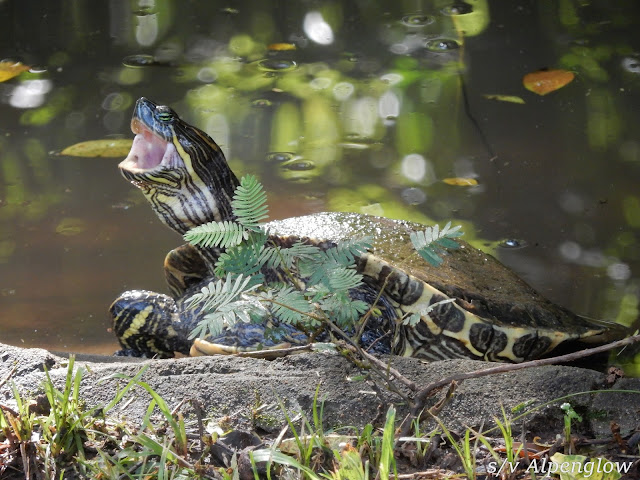 The Garifuna , sometimes called the Garínagu , are the descendants of Black Caribs from St. Vincent and their name means cassava eating people in their language. The Garifuna culture is very strong with great emphasis being placed on music, dance and story-telling. The Garifuna practice their own brand of religion, a mix of Catholic, African, and Indian beliefs. Because of their independent nature, and perhaps just because they are different, over the years the Garifuna have been feared and discriminated against and variously accused of devil-worship, polygamy, voodoo and speaking a secret language. 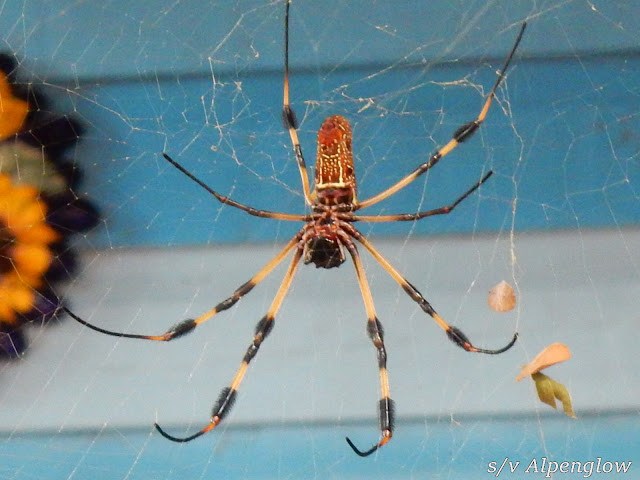 CLEARING IN: Captain and all crew must go to clear in.
The Port Captain will require 2 copies of your picture passports and one copy of both sides of your boat certificate.  Best to bring your own copies.  He will also need 2 pictures of your boat.  One from the side and one of the back with your boat name.  If you get the younger Captain of the two, you may be able to email him the pictures however if you get the older Captain, he'll want you to bring your boat in close or at the dock so he can take a picture with his phone.  No charge.  Port Captain only gave our boat 30 days which is renewable.
The immigration officer will want one copy of your passports (they will not make copies for you).  They took pictures us and took our fingerprints.  She charged us $6US.  We got 90 days.

CLEARING OUT:   We did not clear out of Utila and haven't yet however we did hear that pictures of your boat is required when clearing out also.
There are no customs or agriculture officers.

GROCERIES:  You may leave your dinghy at Bush's market and we were told we could leave our dinghy there even though we don't shop at Bush's.

DINGHY DOCK:  Captain Morgan's dive shop let us keep our dinghy at their dock anytime (we did dive with them though).  Other bar/restaurants have dinghy docks.