Carriacou is a small, quaint island with very friendly locals.  We anchored in the protected Tyrell Bay where you can find some restaurants, bars and small grocery store.  Here, the music can be quite loud on certain nights. 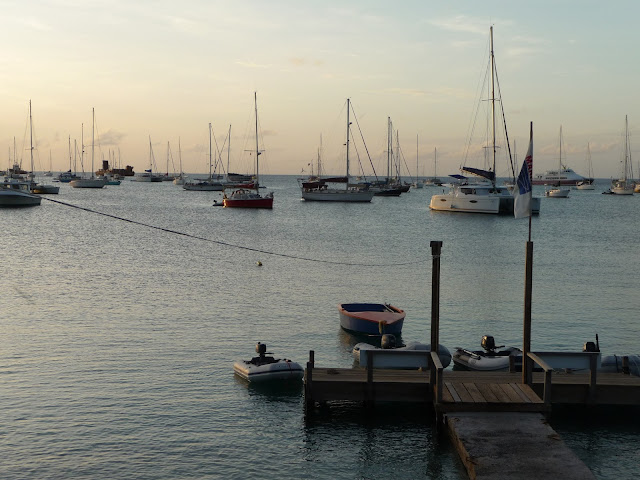 We met a guy who lives on a derelict sailboat with no mast.  His ankle was all taped up.  I asked him "What happened to your ankle?".  He responded “A dog bit my foot and then I kicked it, breaking my foot”.  He must of kicked that dog really hard !

There is no water on the island.  The only way to get water is to collect the rain water.  There are approximately 5,000 inhabitants on the island.

We took the local #10 bus for $3EC to Hillsborough, the main town.  There you can find some grocery stores, vendors for fresh veggies and fruit, a fish market, post office and several restaurant/bars.  We particularly enjoyed ‘La Playa’ restaurant.  For $30EC we were served a large portion of Mahi Mahi burger with fries or salad.  It was absolutely delicious.

A visit to the  town of Windward was well worth it.  Take the #11 bus from the bus depot in Hillsborough.  Anthony McLaurence is currently building a wood cargo/sailing ship that’s about 75 feet long and 18 feet wide.  The wood he’s using is white pine, mahogany and cedar.  Some of the wood is local and some are imported from Grenada and other islands in the area.   Mr. McLaurence said he’ll launch approximately in July 2016.  I wish we could be there for the festivities where they’ll roasting pigs and goats.  It’ll take about 300 people to launch the boat.  It’ll be an all day ordeal. 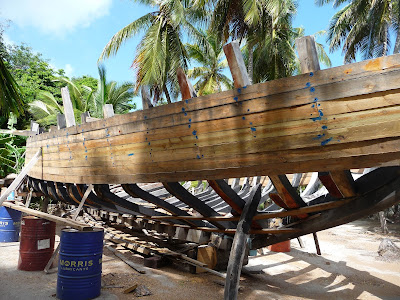 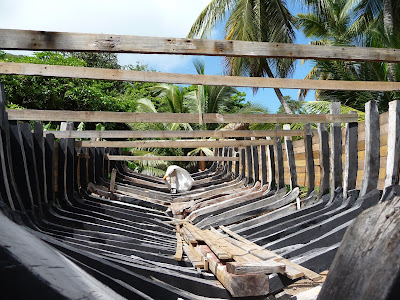 Sitting by the ocean having beers before lunch was Lynn and Kevin we met from Lake Manitoulin, Ontario.  They bought a house down the road 4 years ago and make Carriacou their home 6 months out of the year.  They were kind enough to invite us to their home where they showed us their land turtles.  During December, they mate and make so much noise that it’s their entertainment as they don’t have a television.  Turtle Porn they call it.  It’s unfortunate in the fact that they no longer grow vegetables in their gardens because they kept getting their produce stolen.  In fact, one night around 2am, they saw someone carrying a goat on their back….They figured that the person was stealing this goat.  Sad. 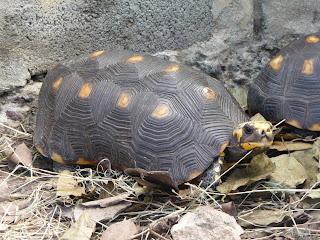 In July 1945, children found an anti ship mine that was washed ashore.  It unfortunately exploded and several people perished.  A monument was erected at the site. 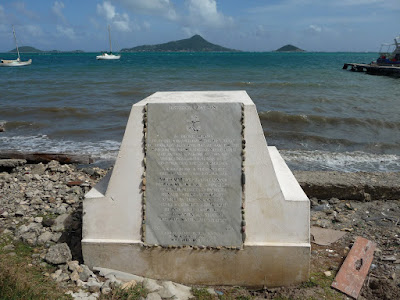 About a 25 minute walk from Windward to Bay A L’eau, along the seashore you’ll find a cemetery called T-Bone.  Locals are buried here next to the ocean in hopes that one day they’ll be washed out to sea.  Then, why don’t they just get dumped into the sea when they die?  It’s a creepy place. 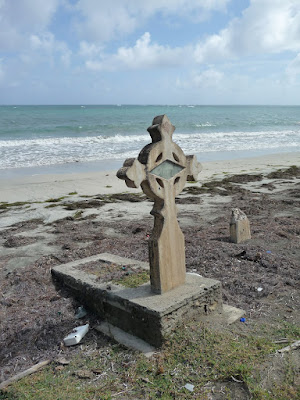 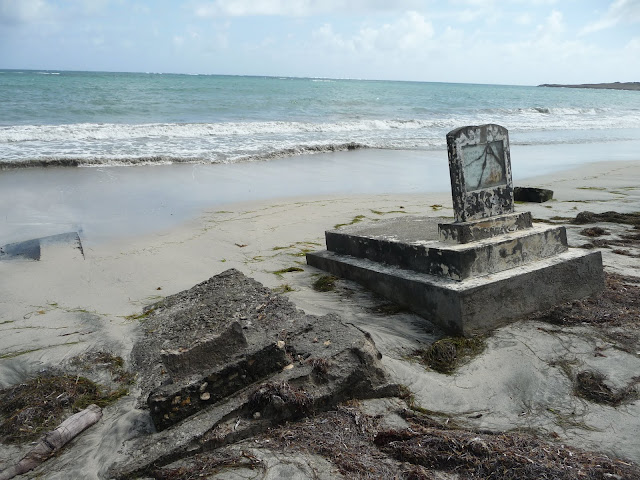 We walked the beautiful Paradise Beach in L’esterre.  It’s a wonderful beach with clear water and some restaurants & bars along the way.  It’s very low key and well worth spending some beach time there.  It’s here you will find a brightly colored container which is the Fidel Productions store that has lots of local made crafts and batiks.  It’s a bit on the pricey side but everything is very well made.  Across from Paradise Beach is Sandy Island.

Sandy Island is basically a sand bar across from Paradise Beach in L’esterre, Carriacou.  It is a protected sea park and there is a small fee to take a mooring buoy here.  Previous storms washed up coral on the windward side protecting this little island.  If you look closely, some places have pink sand which is pink coral that has been broken and washed up on the beach.  The water is amazingly clear, probably because of the strong currents.  Snorkeling is best on the East end. 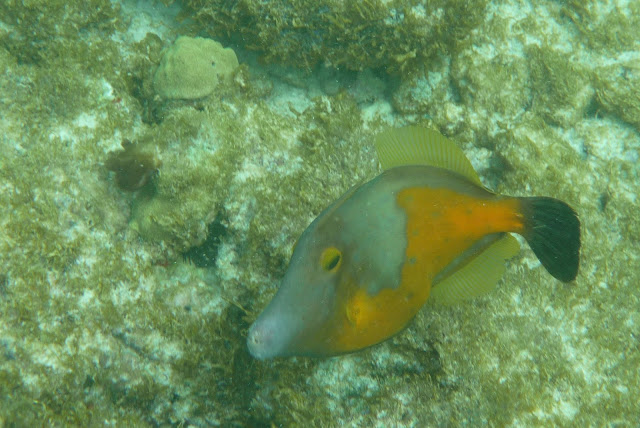 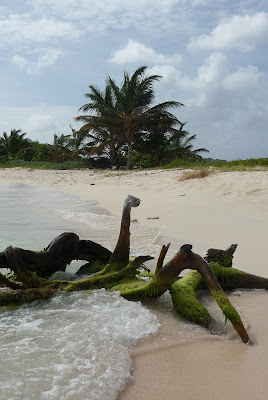 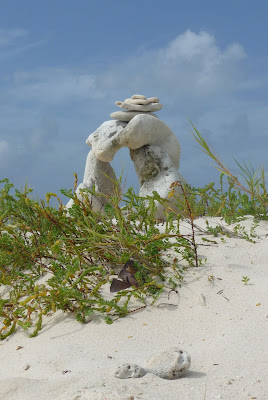 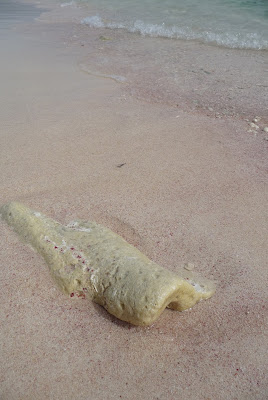 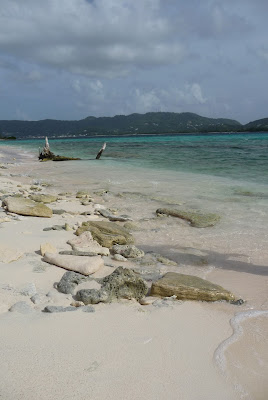 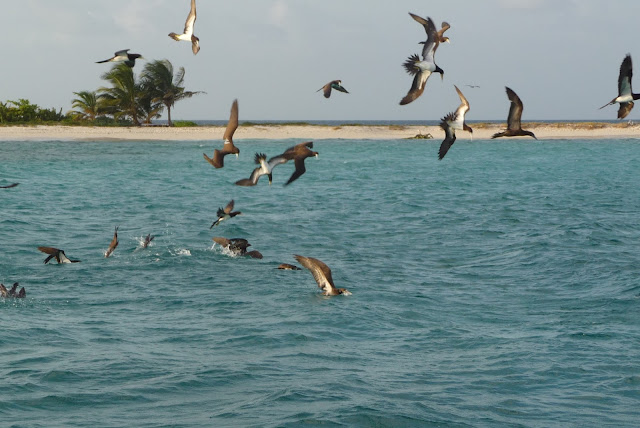 After a beautiful night at Sandy Island, we motored to Hillsborough, Carriacou to clear out and get some fresh fish from the market.  This time, we bought some Lion fish and Red Snapper.  Both costs $20EC, that’s about $7US.  It was our first time eating Lion fish and it is truly delicious.